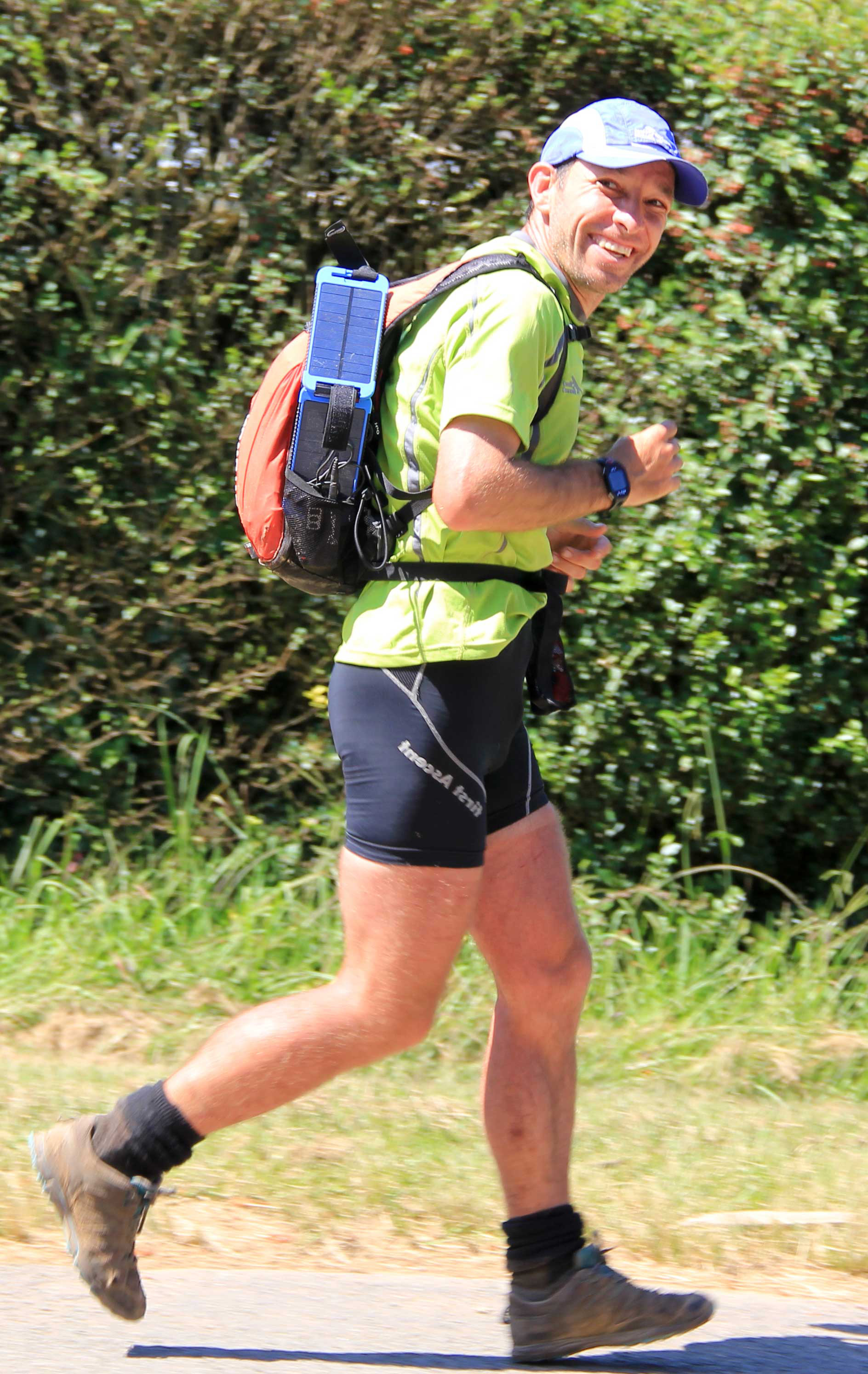 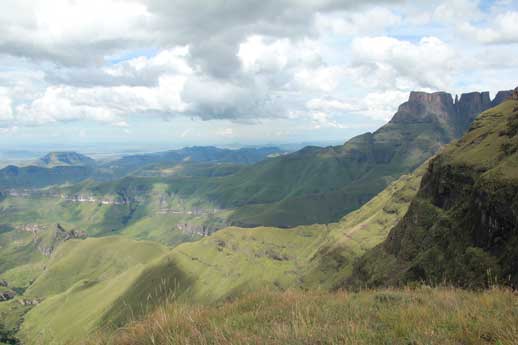 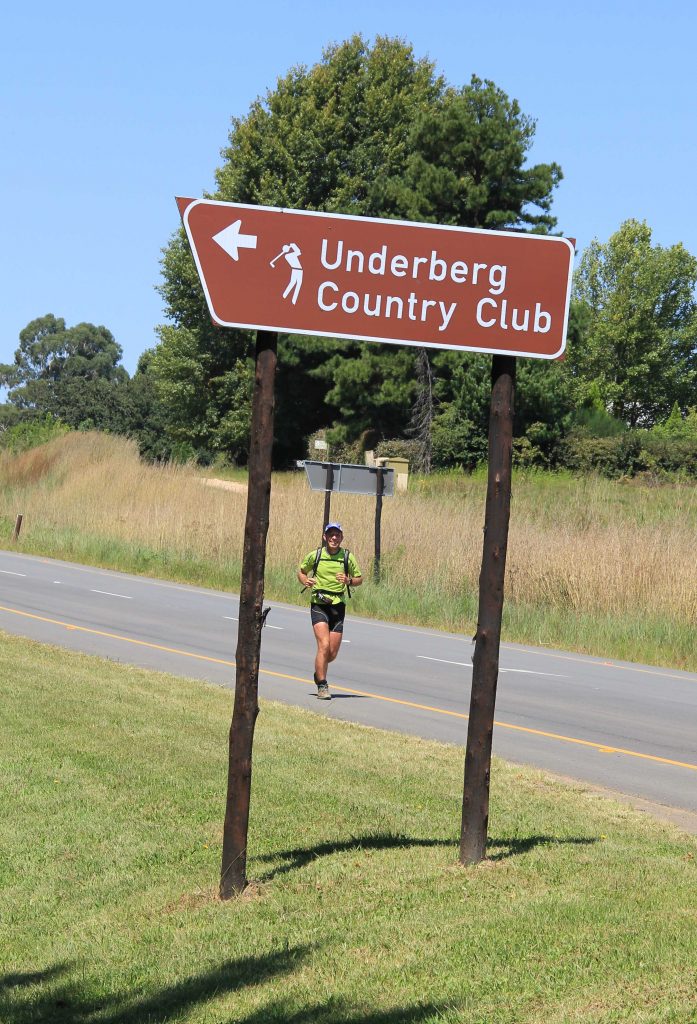 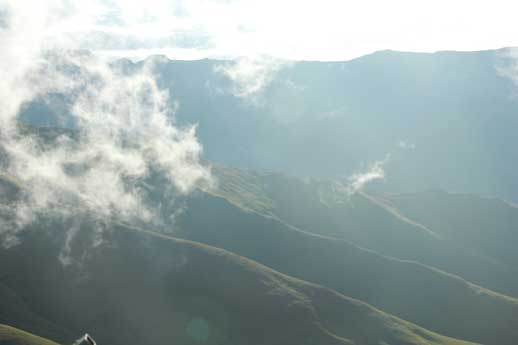 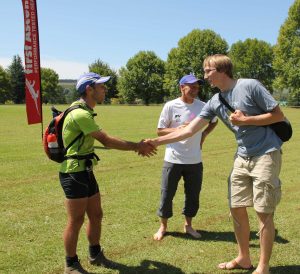 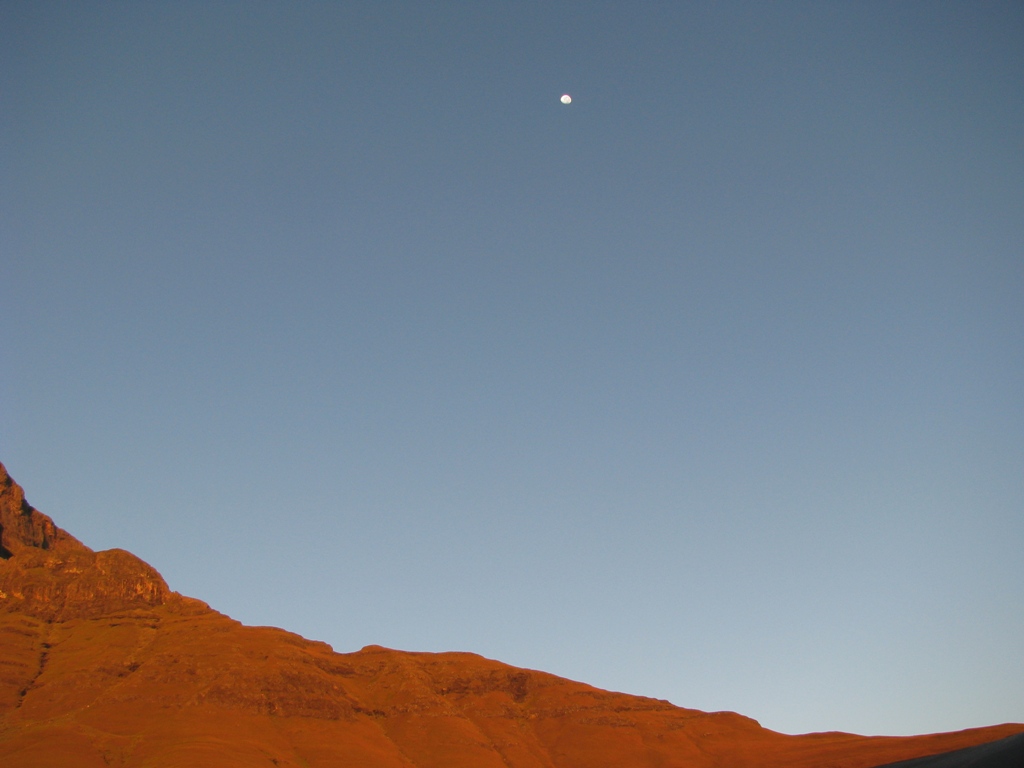 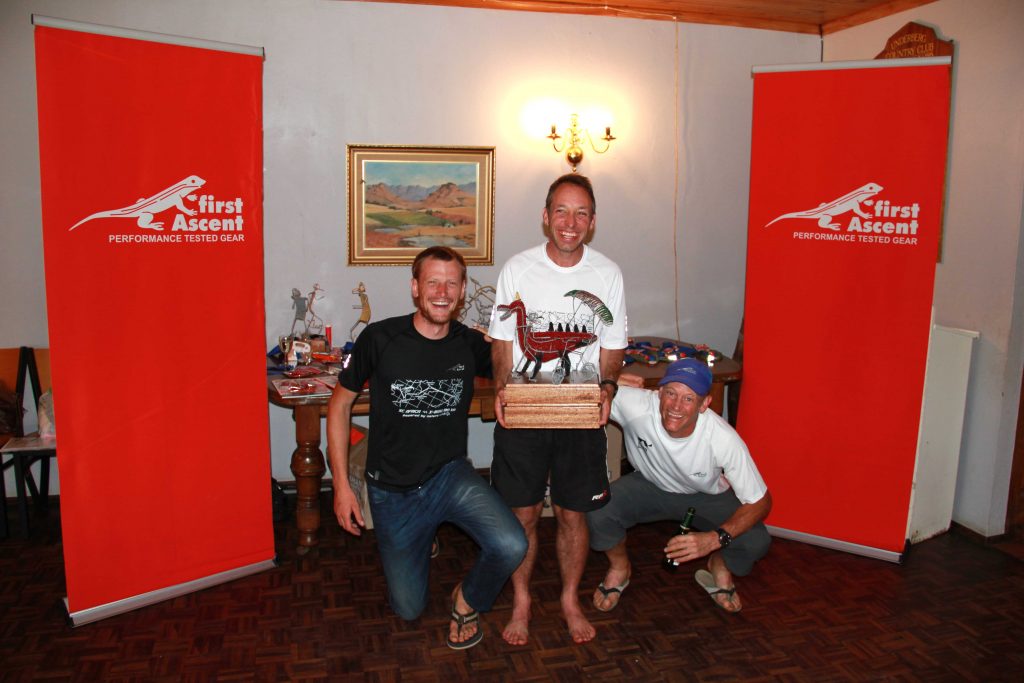 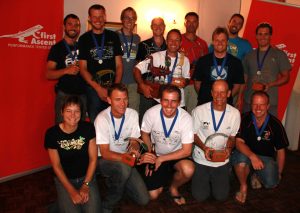 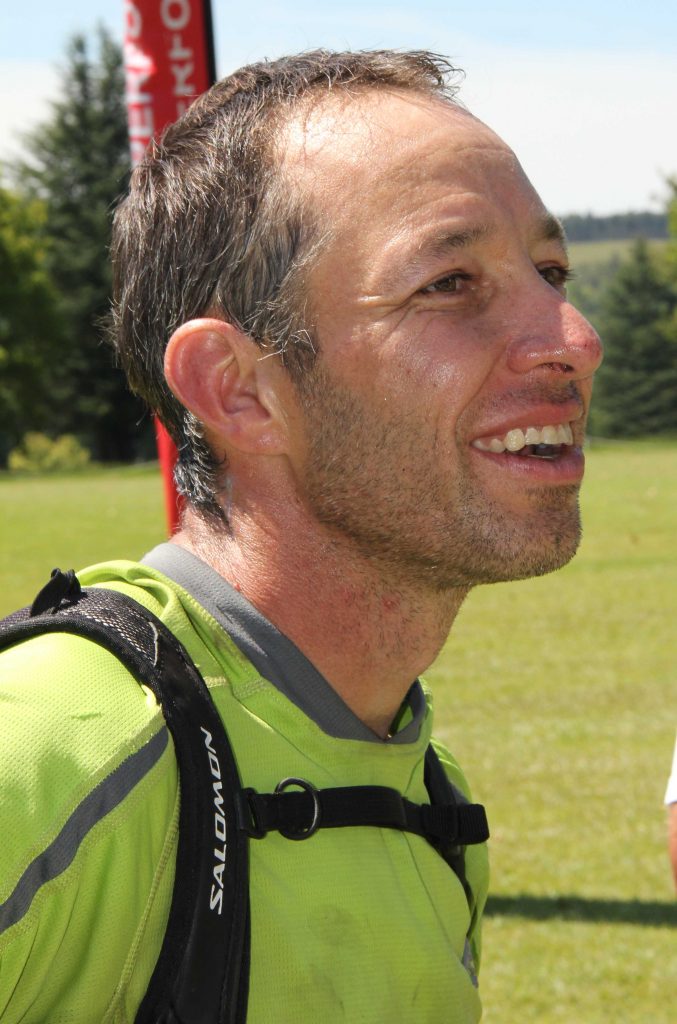 A personal report back on the 2014 X-Berg Challenge
By Andrew Porter
Published on Wednesday, 07 May 2014

The X-Berg challenge is a fresh concept developed by the organisers of the event, Pierre Carter, Linda Willemse and Alistair Stuart. It is a race that traverses the Drakensberg from the top of Oliviershoek Pass, through to Underberg, with six checkpoints along the way. A twist is that you can either go on foot, use a bicycle or a paraglider. Once you chose your means of transport, you are stuck with that for the rest of the race. It is a simple trade-off of going for a lightweight run, or taking the extra weight up the hills to go faster down them.

I chose to go for the running option and soon enough realised that I was in for a route about 270km long. Half the race would be on the escarpment, following the route of the grand traverse, while the rest would entail a trashing along the contour paths of the little berg.

To cater for the paragliders in flight, the checkpoints are virtual cylinders of variable diameter (typically 200-500m) extending into the sky. This means precise navigation via GPS to avoid travelling further into the cylinder than required. I gave out my GPS to a fellow team days before the race meaning I would have to do this the hard way. Prior to the race, I had at various stages in my life done about 170km of the route, and backed my navigation for the remaining 100km based on a good study of the maps before the event.

A further complication (to me at least) was a rule requiring us to remain stationery between 11pm and 4am each night. I typically plan to keep moving at this time, and thus can get away without tents, sleeping bags or any warm gear at all. This simple trade off allows me to move rapidly with a light pack, with the significant downside of an extremely cold night ahead. Each competitor was handed a GPS tracking device that should make it possible for anyone to know where each competitor was via a real-time updated website. Otherwise, the rules are simple, and allow a large amount of flexibility in planning and executing your race.

This would be my first race in several years. Needless to say, especially over that distance, I was unsure of my fitness levels. This made it extremely difficult to predict how long I would take to get anywhere and let’s be honest and admit that I was not even sure if I would finish. We were allowed to send a bag of goodies ahead to any of the checkpoints, allowing us to keep our weight down and comfort levels up. Of course, not having any idea where you would be at any time in the race made it impossible for me to plan the checkpoints properly, so I settled for sending a change of clothes and lots of food to each of the checkpoints at the Sentinel Car Park and Giants Castle. I did not send any sleeping gear anywhere because I did not initially expect to be at any checkpoint when it was time to sleep.

A peculiarity of the race rules allowed the competitors to choose a start time of their choice between Sunday 16 March and Wednesday 19 March. I chose to start as late as possible, which gave a benefit of both knowing what pace other competitors were going at, and also as it turned out, gave me a better weather window. The race duly started on the Sunday, and I spent two days of leisure tracking the teams online from the comfort of my home. This is indeed a preferred way to race 270km!

I eventually set out from the top of Oliviershoek Pass at about 13:30 on Tuesday and made my way to the first checkpoint 20 minutes away. From there, a simple jog took me down Oliviershoek Pass to Little Switzerland, to gain a dirt track that took me down into the valley leading up to the Cavern. Here, I took a very bad route choice and headed up to Cannibal Caves and had to solo a grade 15 or so to get through the rock bands onto the main ridge above. I had drunk too little water in the heat if the afternoon, so I had a few cramps, and had to use the last available light to find water along the ridge. After sorting all the mess out, I set off into the dark unknown ridge hoping Witsieshoek was not too far away.

This turned out to be the case, and by 8pm I was heading up the road to the Sentinel Car Park. This was one of the highlights of the race for me as the full moon was out and I could run up the road by moonlight alone. It is the first time I have ever managed to time a night time run in the Drakensberg with both full moon and good weather! I spent a warm and pleasant night in the hut at the car park.

Next morning broke to another perfect day. I made good timing to Tseketseke Pass despite one minor route choice error behind the saddle. Not bad for someone running without a map or GPS! I then lost 30 minutes finding the top of the proper pass, having being caught out by the huge saddle just north of the top. Tseketseke Pass turned out to be as slow going as I had expected, and shortly after getting onto the contour path it got dark. Here, I met another competitor, who had made an interesting descent of Xeni Pass the previous night, using the cords to tie up his paraglider to abseil down bands of rock in the dark. I made my way a few kilometers before holing up for a long and cold second night just past the point where the Mikes Pass road meets the contour path. Lack of cloud cover meant I got a full soaking of dew and I maybe got 10 minutes of sleep, but maybe not.

Next morning (Thursday) I made my way across the Didema valley and trashed through several kilometres of brambles along the contour path to get to the highway coming down from Keith Bush Camp. The endless ins and outs of the contour path of course ensure that anything takes an age. Along the highway itself, I fortunately started to realise my fitness cannot be too bad – two full days into the challenge I was still able to run at a decent speed.

As I was making my way down the Shada ridge towards Injasuti camp, I heard voices ahead. It turned out that two girls were skinny dipping in a pool, so I said hi, and politely looked the other way while filling my water bottle. It turned out though that I caught up to my friends in the Tokolosie team. Having a solid 150km behind us, we each had a few tales to tell, so we had a good chat. I admit to being pretty psyched at this point. Until now, it had been a rather lonely trip, and the company although fairly brief was really appreciated.

About 3:30pm I started the haul up the Little Berg to gain the fire station directly above the Injasuti Camp. A hard hour later I was on the management track leading towards Giants Castle, making good time. Mist came in just before it got dark, and I spent a few anxious hours navigating the (unknown to me) track with very poor visibility. Compounded to this is that by now I was pretty cold due to exhaustion, and a lack of warm or dry clothes. I eventually pulled into the camp at Giants Castle about 10:45pm. Here, I found the trailer containing my goodies and after hacking the code for the lock (I had forgotten it by now) managed to get at some warm and dry clothes. I spent a cold and uncomfortable night with little to no sleep outside one of the huts and set off again at 4am (Friday). (I ALWAYS set off at 4am, because I was always very cold and wanted to get going the moment the compulsory stoppage time ended).

At the time, conditions were far from ideal: I was in thick mist, but I backed two things – the cloud was low so if I could get high I would be above it, and I also suspected that once I was deep in the valleys of Lesotho, I would have sun even if the escarpment itself had thick cloud.

Giants Pass took an embarrassing 5 hours mainly because I kept getting lost in the mist, never having done the pass before. Eventually I broke through the cloud to reach the sunshine on top. This was a turning point for me as I now felt safe to continue. I had not wanted to carry on in the damp and cold mist in my present state of fatigue. I was now on familiar ground following the route of the grand traverse and made good progress up to Thabana Ntlenyana. I always love running down the gentle slopes south of this peak – they are green and spongy, and slope at just the right angle that you are on your feet most of the time, with soft falls for the rest. I made good timing and was on the Sani Flats by darkness.

Along the way, I had made a simple choice – I could either spend a cold night somewhere next to the road below Sani Pass, or I could stop at the Sani Lodge on top of the pass for a night of luxury, warmth and a soft bed. And of course some hot chocolate and a warm meal. Choice made, I sped ahead to make sure I reached the top of Sani Pass before the kitchen closed for the night.

The guys running the lodge are fantastic and found a bed for me late that evening (over a long weekend) and found enough warm food and drink to slowly warm my body. For the first time in what was by now a very long time, I had a good night’s sleep.

This of course left me with a long and boring final day. I left the summit about 5am, which conveniently meant I could get to the South African border post after it had opened (at 6am) to avoid trying to skirt around the fences in the dark, but still allowing me to get going early and thus hopefully avoid running during the warmer parts of the day. Technically, I needed to get to Underberg by midday for the cut-off. I was by now too tired to really care, and settled for any pace that kept me moving forwards. I followed the road the whole way, and was reminded every step of the way, that for this section at least, that foot was the worst choice of transport.

The run down the road and into Underberg was mostly unmemorable. I did need to change my strategy somewhat – up in the mountains, fresh water is readily available and I had managed fine until now with a single 500ml bottle for water. Now, in the lower and warmer climate, my water consumption doubled and water was far away. The solution was simple – buy cokes along the way, especially if it means stopping in the shade and hustle and bustle of a local bottle store for a few minutes.

I finally pulled into the finish, 95 hours after setting out, and I had the strange moment of finishing a day behind anyone else, yet still a day faster than them. As usual for anything this long, I find the first feeling to be one of relief, and it takes a while for any other sensation to enter the mind.